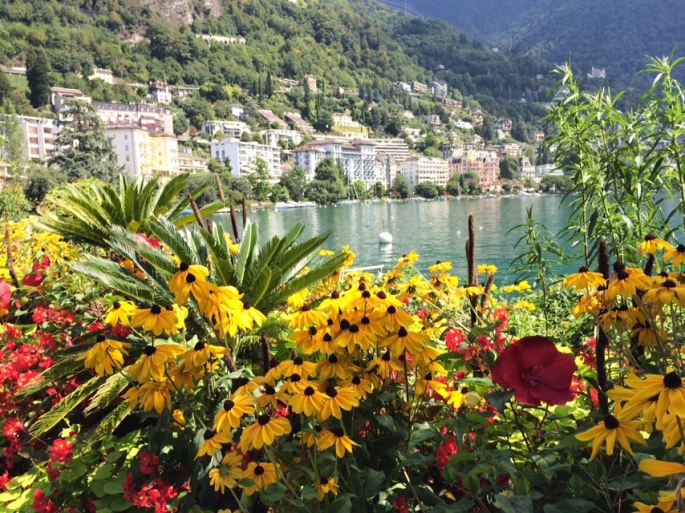 We woke up feeling pretty chilly in the van. It was misty outside and there was a definite bite in the air which made the early morning walk to the shower cubicles rather unpleasant. The campsite here was perfectly suitable but the owner was as frosty as the weather so we didn’t want to prolong our stay. Despite best efforts at being overly friendly we couldn’t tease a smile from her, even when we paid up.

We packed up and got back on the road, headed due west towards Lake Geneva. The lake is shared between France and Switzerland and overlooked by the alps. The scenery on the 75 mile drive was amazing with epic mountains and bright blue sky all the way.

We arrived at a campsite at a tiny town called Bouveret on the tip of the east coast of the lake. It had plenty of open space and a super friendly owner so we plumped for a couple of nights. 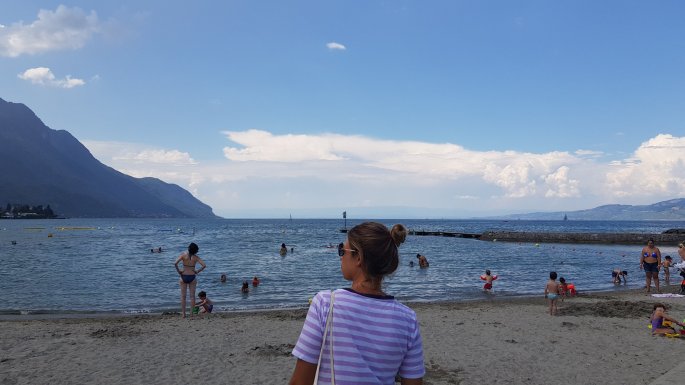 Once we had decamped and had lunch we went for a wander and had a very lazy afternoon by the lake shore.

The weather wasn’t as hot and beautiful as the Italian lakes, probably because of the higher altitude and huge mountains casting shadows but it was a great way to destress. 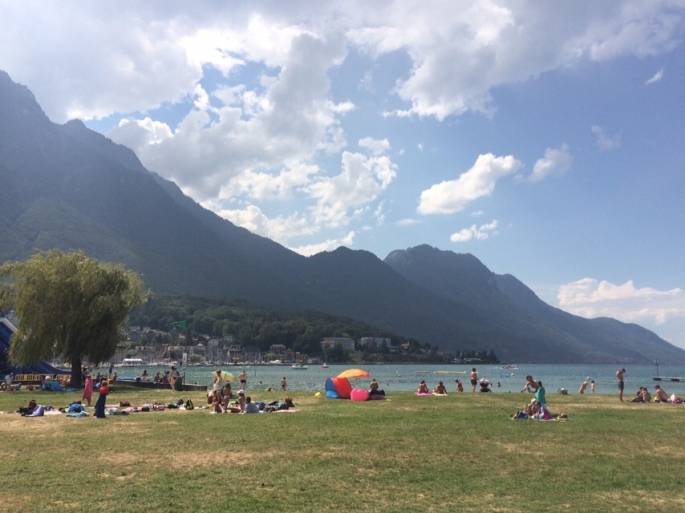 We found a swimming pool and beach area and lay and ate ice creams and listened to our podcasts. I’m afraid to say that I was so lazy that I didn’t even brave the water for a quick dip but Gary did and reported it to be ‘refreshing’, which I interpreted as cold.

We had a BBQ back at the campsite and watched a film. We’ve been making the most of WiFi when we find it and we stockpile downloads of films to watch when in more remote areas. We are at the mercy of what Netflix has to offer but we’ve had some good viewing recently and it’s prompted me to sit down to a few classics that I’ve been meaning to watch or rewatch, including Scarface, Kramer vs Kramer and American Psycho… a jolly collection!

The next day we went for a bike ride in search of Montreux, a town on the north eastern shore of the lake. There was a bike lane that took us along the eight mile route. 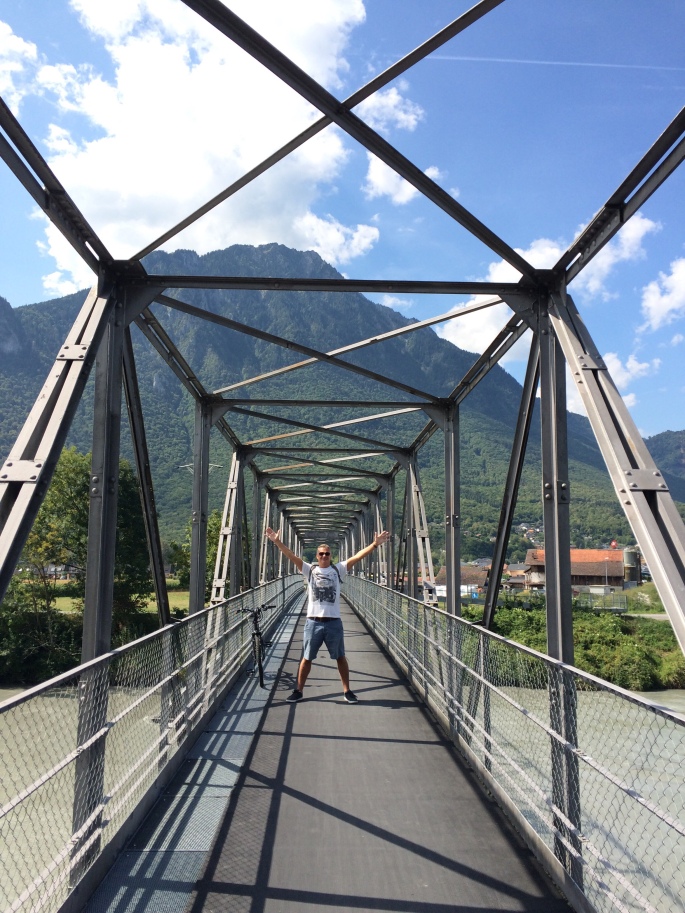 Firstly we crossed the Rhône and then cycled through beautiful fields of maize on our left and vineyards on our right. Occasionally the path would open out to give us glimpses of the lake and small harbours before we were back in shaded woodland or farmer’s fields. Once we reached the midway town of Villeneuve we hit the lake proper and followed it all the way round. 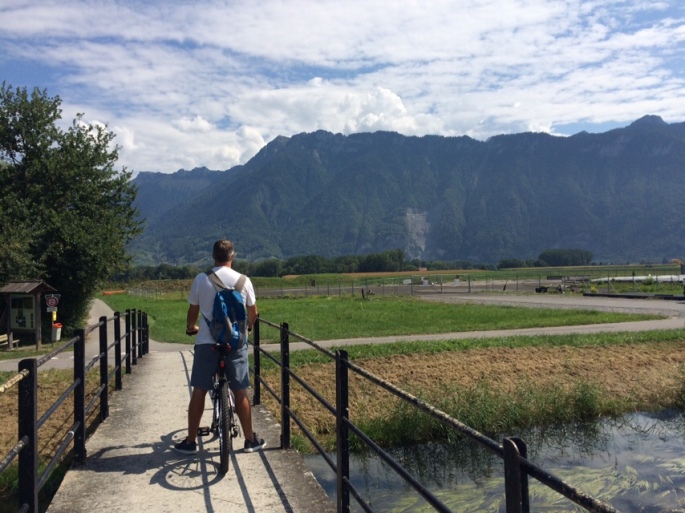 The lake side cycle was absolutely beautiful.

As we cycled on the silhouette of lakeside Chillon Château came into focus. Dating back to at least 1005, the Chateau was built to control the road from Burgundy to the Great Saint Bernard Pass. From the mid 12th century, the castle was summer home to the Counts of Savoy, who kept a fleet of ships on Lake Geneva. 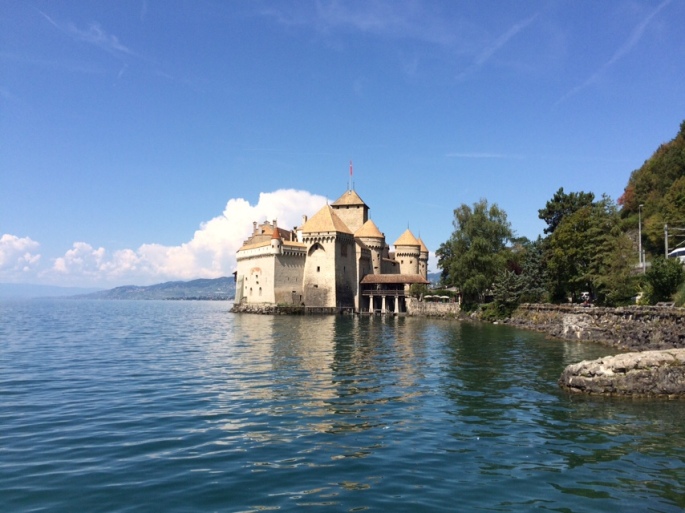 With the backdrop of the lake and the mountains it made a picture perfect location for such a grand castle.

As we approached Montreux, the cycle lane was flanked by incredible displays of flowers.

They went on for a couple of miles and were absolutely stunning. We were so pleasantly surprised by the area as a whole. 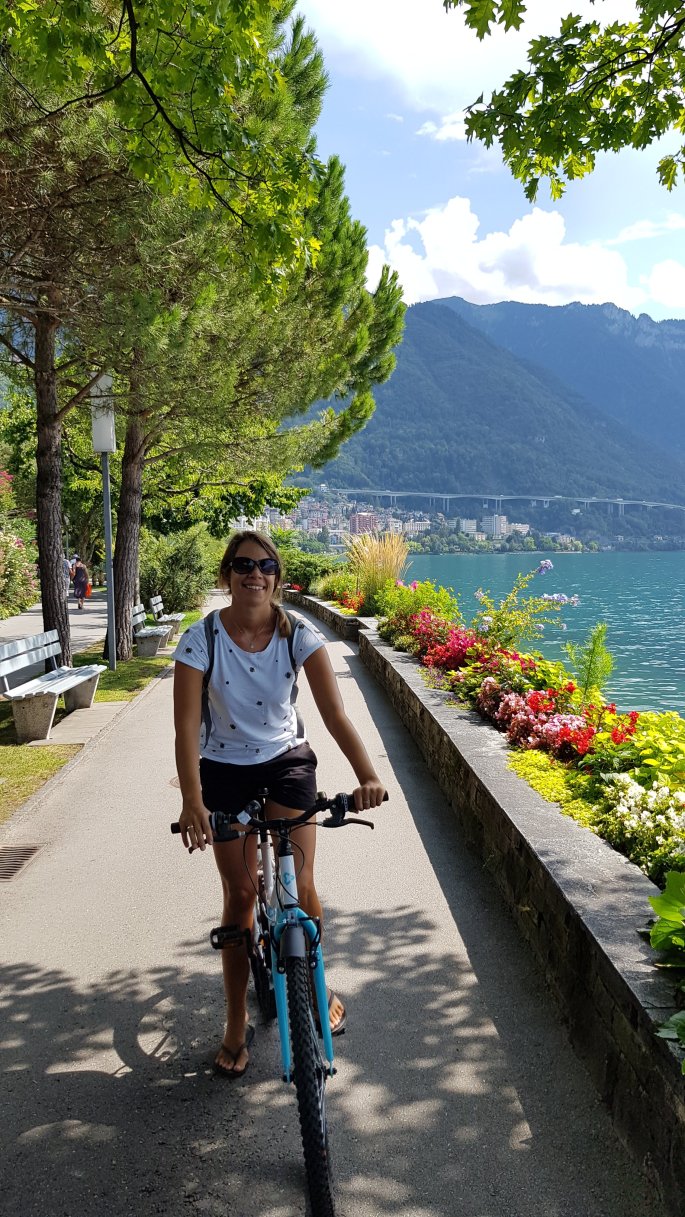 So many people were out and about enjoying the weather and the lake. There were sculptures and modern artwork dotted around and nice places to sit and picnic which contributed to a really serene atmosphere.

The town of Montreux was very pretty with a harbour, huge marketplace and plenty of waterside cafes and restaurants. 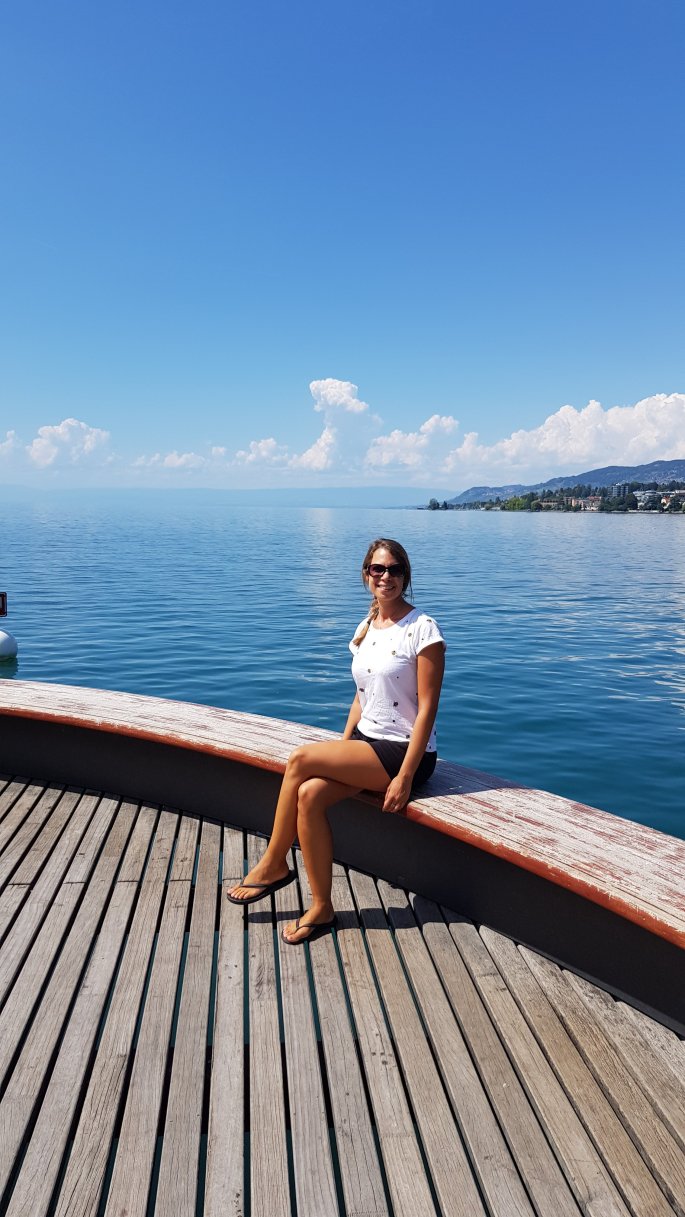 We had some lunch overlooking the lake and watch the grand tourist boats dock and unload. Later we had a mooch around the shops. There was time for yet one more gelato before we headed back on the cycle lane to the camp site.

From first impressions Switzerland seems incredibly clean and efficient and beautiful but is expensive. 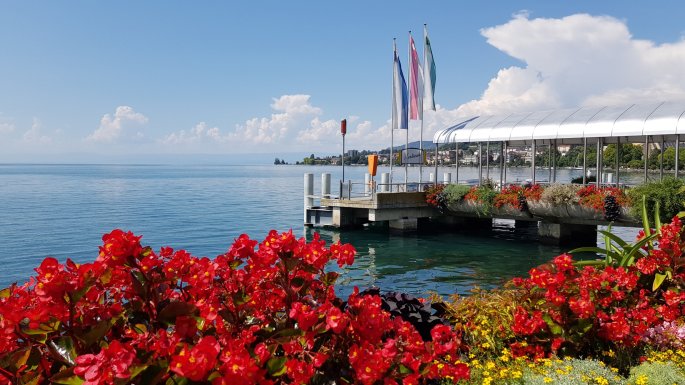 We are talking six euros for a water in a restaurant and seven euros for an ice cream. It’s a good job the views are free! We have loved Switzerland so far but it was always going to be a brief visit and we are pleased we’ve dipped our toes in on this side of the alps. We think we’ve got another couple of days here before we edge back into France and leisurely make our way down to Ginestas for my brother’s wedding in a couple of weeks. 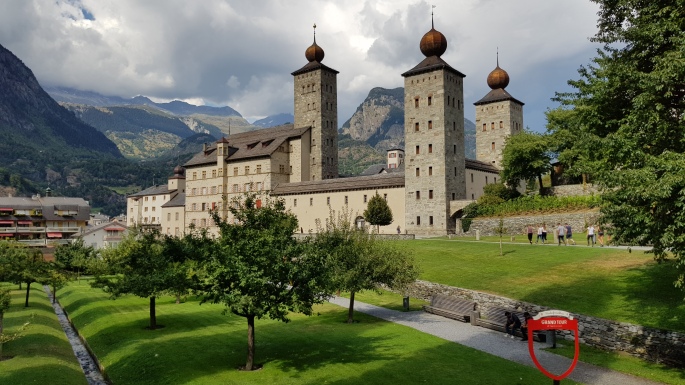 There were two options to traverse the Alps from Lake Maggiore. Over or under. Under would have taken us through the Mont Blanc tunnel from Courmayeur in the Aosta valley, Italy to Chamonix, France. Over would take us over the Simplon pass to Brig in Switzerland. We opted for over to take in the breathtaking views. 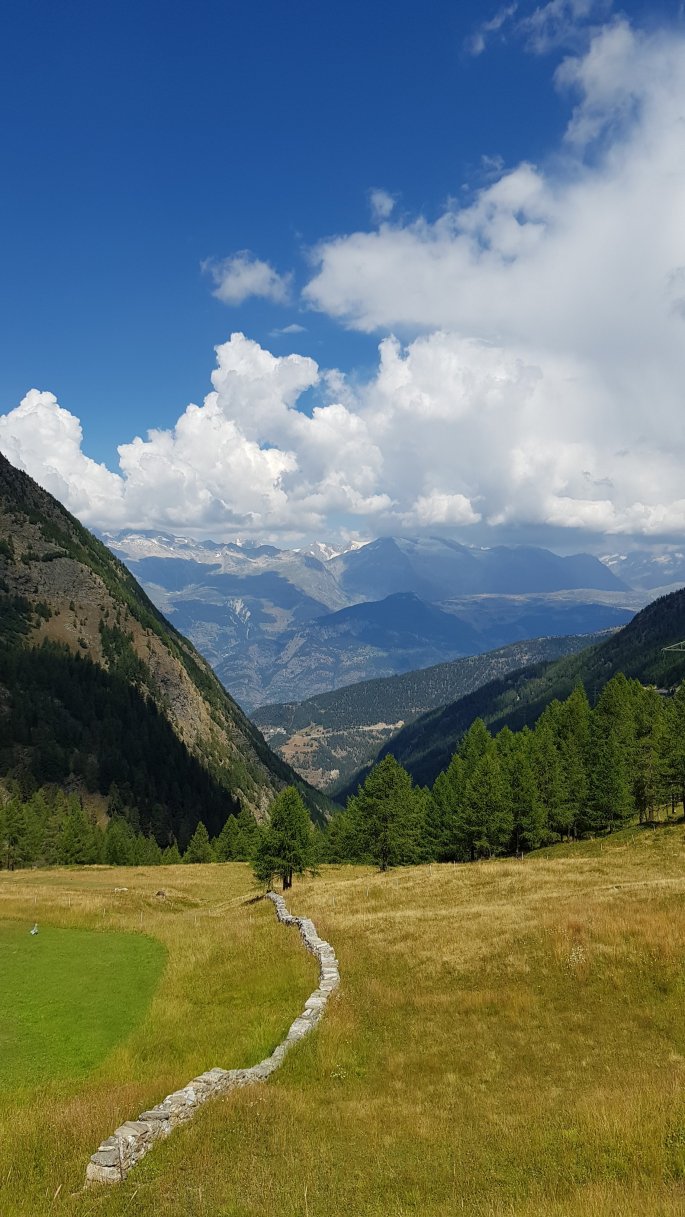 There has been a locally used passage through here for centuries but more famously, Napoleon ordered the construction of a road way back in 1801. Thanks buddie ya really helped us out there. 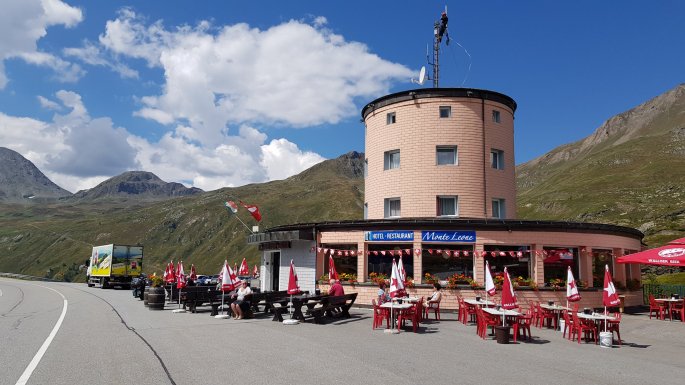 At 2000m altitude it was pretty chilly at the top but the scenery was stunning. This is Emilys wtf face… 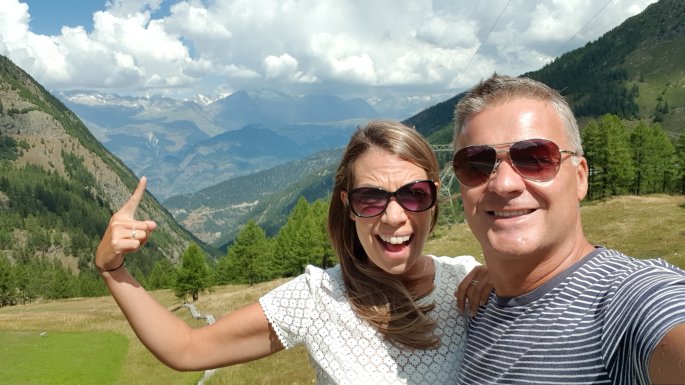 We drove along incredibly steep roads but they were super safe and well maintained. Ah, we said to ourselves. Swiss not Italian roads. Thank heavens. At the bottom of the pass about 1206m lay Brig and its beautiful castle. 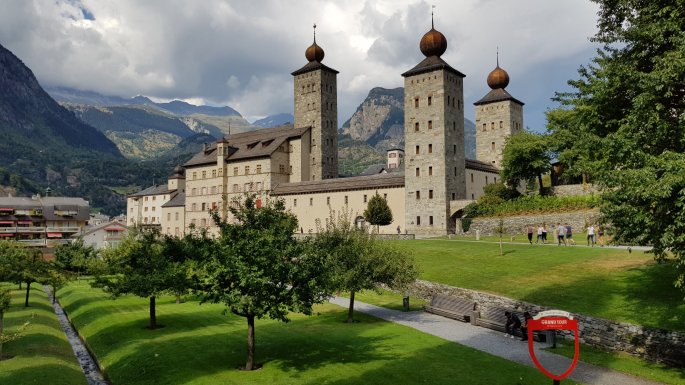 As we neared the castle we could hear amazing operatic voices practicing for their performance. The accoustics and the back drop made for a pretty heady enchanting mix. We saw seats laid out and presumed the performance was tonight so we went to enquire what was on. We were disappointed to find out the performance was in 2 weeks but ecstatic to find there was an open air cinema tonight. Could it be they were showing something we wanted to watch and in english. Could we be that lucky. Well what do you know… 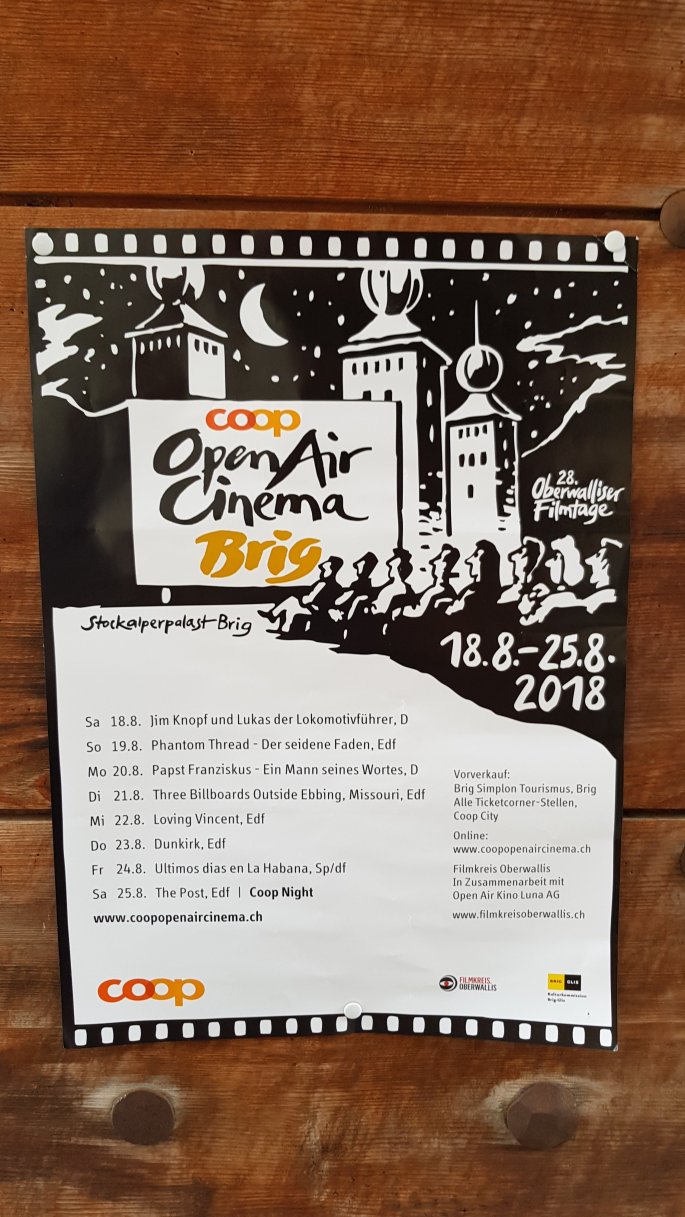 Emily had been raving about “Three billboards” for quite some time now after listening to the review on her podcast. It was on at 9pm and in English with German subtitles.

We wandered through the town in search of the tourist information office to purchase a couple of tickets. We then had a few hours to kill. I found a coffee shop, Emily found a flamingo top. 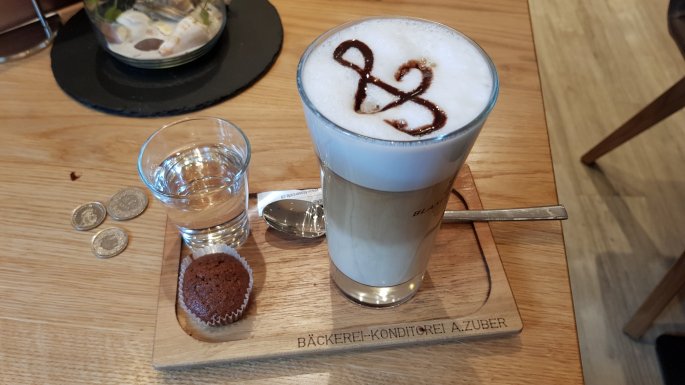 We then decided as it was still a bit chilly that we needed warming up with some hearty local Swiss dishes. I had a rosti with lots of melted cheese (food of the gods) and bacon. Emily had something called Cholera, which didnt sound so appealing but tasted amazing. It was basically a local pie containing potato, leek, apple and local cheese. 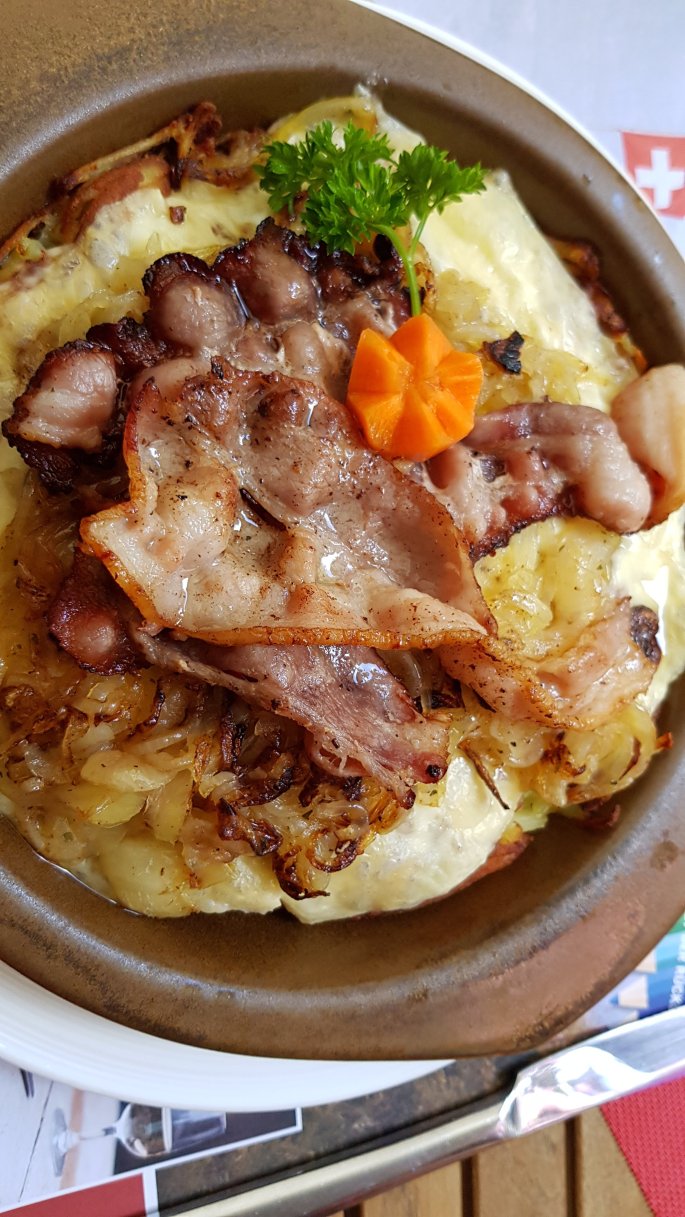 Suitably fed and watered we arrived early to the open air cinema to get good seats. 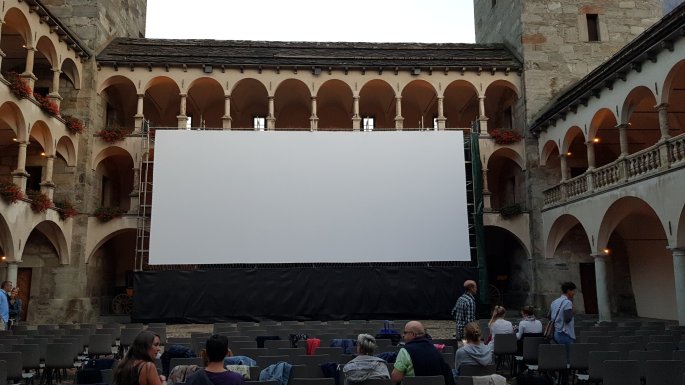 The backdrop of the mountains we had just driven over and the castle courtyard was too much. We couldn’t believe our luck. 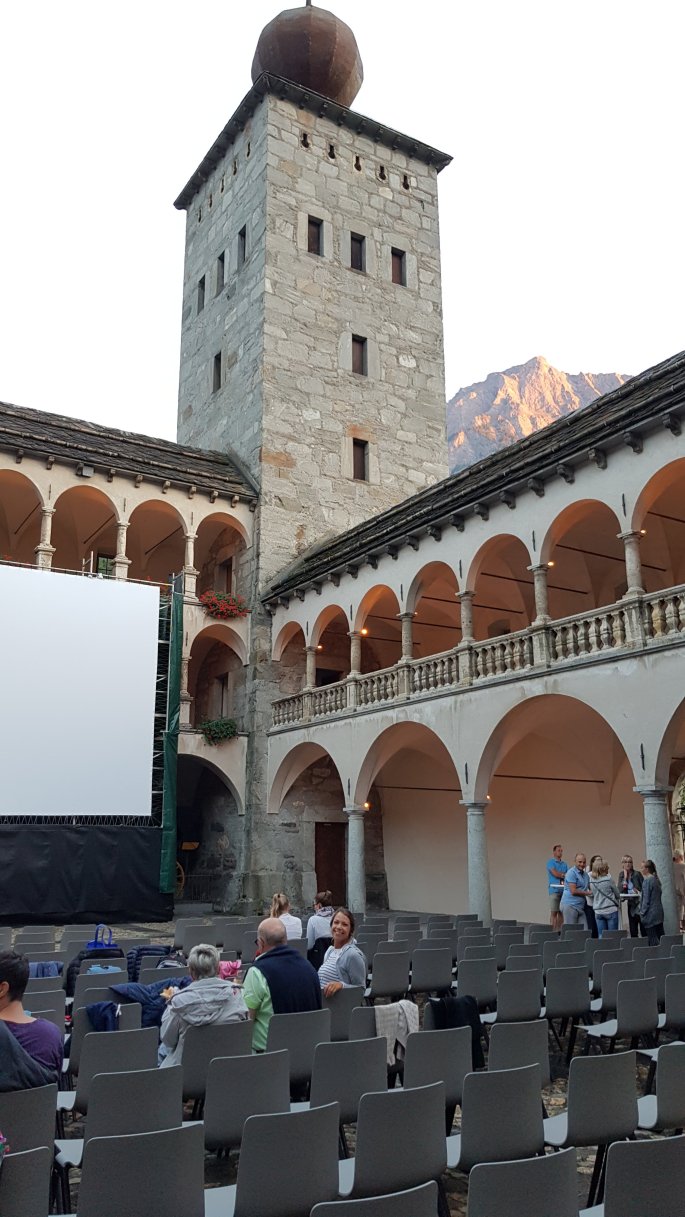 As darkness decended the soft lit alcoves looked cool. They dimmed to darkness and the film began. What a cracker of a film too. Lucky us. 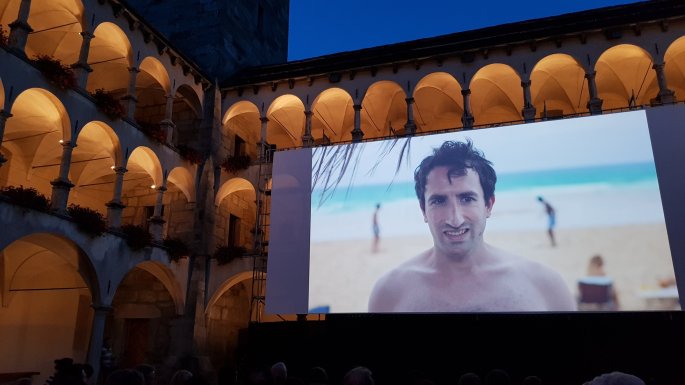 You may be wondering what YoYo stands for? We were both looking for a new adventure to combine two of our great passions, food and travel. During one rum filled night in The Botanist, Marlow, we decided to take the bold decision to have a “Year Off”. We liked the idea so much we named it twice Year off Year off or YoYo for short. This blog is a way for us to remember that year off and also for friends and family to live our adventure with us.